Children don’t have a lot of control over what happens to them in their lives, especially children such as ours who have often been moved from home to home many times in their short lives. Something they can control, however, is what they will put into their mouths and eat.

Children exercising control over what they eat can turn your fantasy of happy, healthy family mealtimes into a nightmare of frustration, tantrums and tears.

New parents worry (usually needlessly) that their children are going to starve to death or develop rickets or scurvy as they insist on a diet of crisps, donuts and fizzy pop. 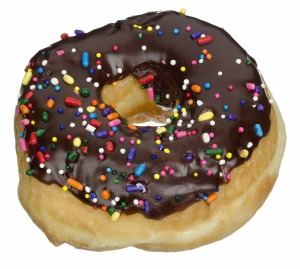 The problem with mealtime battles is that you are going to lose. Short of tube feeding you can’t actually make someone eat, and it’s generally a very bad idea to try. And in the meantime, you are all going to get so stressed out and unhappy that food and eating could turn into a serious problem in your lives.

So, if you have found yourself an unwilling participant in a food war with your child, here are some ideas to try and de-escalate the conflict and declare peace at the dining table.

You will also find some tried and tested recipes that busy parents on a mission to feed their little horrors healthily will appreciate.

My children always felt over-faced by bigger helpings, which I, as an inexperienced parent, was inclined to offer. I soon realised they loved to pick at lots of interesting little things on their plates, which is how the Snack Supper was born in our house.

My teenagers still consider this their favourite meal. We start with a slice of ham, a boiled egg, some little cubes of cheese, toast fingers or breadsticks, a little bowl of baked beans or spaghetti hoops, carrot sticks, a  sliced apple, a handful of grapes, cherry tomatoes, and so on and so on. The key being not too much of any one thing.

My daughter now makes her own enormous Snack Banquets with 10 different kinds of fruit and veg. I let her eat her banquets in front of the telly (see “Give up on the fantasy” below) because if I had to wait for her to eat her meal incredibly slowly, I would be climbing the walls.

They probably won’t starve/get malnutrition. Keep a food diary to reassure yourself about what is actually being eaten. You may be surprised and find it looks a lot better than you thought. Try to offer things they will eat as snacks – a sliced up apple and a banana here, a piece of cheese and a carrot stick there – and  before you know it they’ll be hitting the 5-10 a day goal.

Give up on the fantasy

I had so many ideas about family meals and good manners and healthy eating when I started out. This is what I thought mealtimes would look like in my house.

See the smiling children, the clean tablecloth, the healthy food. Isn’t it delightful? Well, that’s not what my life looked like. Many a time I sat, almost in tears at the kitchen table, trapped by my own rules as the children screeched, fought, lobbed food at one another and generally behaved like wild animals.

I hated mealtimes so much. In the end, I had to ask myself some hard questions. What was it I was actually trying to achieve by these hideous sessions? Was anyone benefiting from them?

The answers were quite obvious. These mealtimes were all about me trying to live up to my own strong and fixed ideas as to what a family meal should be like. I felt such a failure and I was also deeply embarrassed by having children who behaved so badly at the table. Although I wanted to teach them something better, I had to accept that my attempts were doing more harm than good. My misery and anger about mealtimes was spilling over into other areas of our lives that were not so bad.

So, I took a deep breath and let go of a lot of stuff. I won’t pretend that I don’t regret having to do it, but all of us ended up doing better as a result. And now, many years on, my 15 year old daughter eats a wonderful, healthy, varied diet and is a delight to take out and about.

My 16 year old son is still very difficult, but he maintains a healthy weight (just), eats a certain amount of fruit and vegetables, and voluntarily sat down to a meal with my husband and me last week, which he did not eat with his hands…

BUT… Having said all of the above about letting go of your own unrealistic expectations, you should still try to hang on to some things that really are important. Otherwise you may gradually be manoeuvred into accepting a situation that actually isn’t all right. I feel I have let things go too far with my son and his eating habits. He effectively has complete control of when and where he will eat, and I was horrified to discover in a restaurant recently (we were in holiday so for once he was forced to join us at table) that he eats largely with his hands. By letting this situation arise, I haven’t done him any favours in terms of his ability to “fit in “with society as he grows older.

No frills family food — Recipe of the month

Whisk together with a fork.

Place 4 skinless, boneless chicken breasts into the dish and turn them over in the oil mixture to coat.

If you have time, let the chicken marinade in the mixture for a bit.

Take 1 cup of breadcrumbs* and half a cup of grated parmesan and mix together.

Sprinkle in a thick layer over the chicken breasts.

Bake at 180°C for 25 minutes. The top should be crunchy golden brown and the chicken just cooked through, with no pink juice coming out when you poke it with a knife. Don’t overcook, though, as it will be tough and dry and nasty. 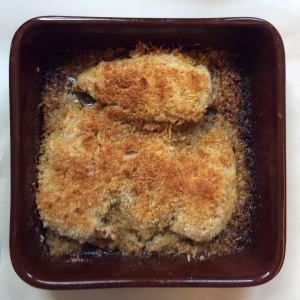 Serve with rice or new potatoes and any veg or salad your children enjoy. 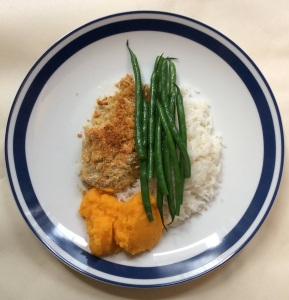 The “orange gloop” on the plate above is carrot, parsnip and swede puree. I find whizzing up root veggies with a bit of butter often makes them more appealing to my children.

Word of the Week

A hobby may seem like an optional extra – a pleasant way of passing the time. But in a number of studies examining resilience in children who have experienced adversity, having a hobby was identified as an important protective factor. So it is worth trying to find that one thing that will capture your children’s attention and encourage them to pursue it with all their might. It might be the making of them.